Please click here to see a list of our supported browsers, and instructions on how to enable JavaScript and cookies
Home/Blog/Save More By Focusing On Big Expenses 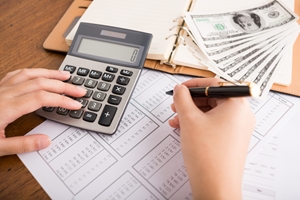 When it comes to budgeting, trimming as much as you can is essential to maximizing your savings and making your money stretch further. Unfortunately, it can be hard to see the immediate impact of saving a few bucks on groceries each week, or making your own coffee, or cancelling an $8 per month Netflix subscription. Over time, small savings add up to a sizeable chunk of change, but without keeping this in mind, it becomes easy to fall off the wagon.

“The average family spends 30 percent of their income on housing.”

Perhaps the secret to effective budgeting actually lies in cutting out the biggest expenses first. According to data from the U.S. Bureau of Labor Statistics, the average American family spends about 30 percent of their income on housing. Food costs can take up 12 or 13 percent, depending on whether the family includes children. Transportation accounts for more than 17 percent. That means these three categories alone constitute 60 percent of the average American family’s expenditure. Factoring in other essentials, like clothing, education and medical care, and suddenly the average paycheck has nearly disappeared.

This can be frustrating for individuals or families who want to save, but it doesn’t need to be quite so difficult. There are a few big ways typical savers can maximize the power of their budgets if they hone in on the biggest two-thirds of their expenses.

One of the most obvious ways to save on housing is to move to an area where real estate is less expensive. However, this doesn’t mean you need to pack up and relocate to the middle of Wyoming – although that’s certainly an option. According to research from NerdWallet, finding the cheap cities to live in is more than meets the eye. For example, in their analysis of average real estate prices and other factors that determine the true cost of living in various cities, NerdWallet also factored median income into the mix. When comparing median income with median home prices, it becomes clear that Scottsdale, Arizona, is actually more affordable than Tucson, because Scottsdale makes up for its higher cost of living with a generally higher average wage. NerdWallet found that cost of living did not always rise in relation to real estate, meaning some small and mid-size cities are actually quite affordable.

Another option that is somewhat less drastic than moving is available to renters. Advice blog Lifehacker spoke to its readers about tips for negotiating rent with one’s landlord, and found that it is a surprisingly realistic option. This is because rent is typically set as much as $200 above what’s needed to turn a profit. By mentioning during the showing that you saw other listings going for less, property managers may sweeten the pot by lowering the rent slightly. Managers may also be willing to settle for a lower rate if the tenant signs an extended lease. If you know you’ll be staying put for more than a year and like the apartment, see what the owner thinks about lowering the monthly rate slightly.

The costs of transit can vary significantly depending on the car you drive, your insurance and other factors. Generally, though, driving by yourself is the most expensive way to get to work, or anywhere else. Bankrate had a few simple suggestions on cutting down on transit costs. One popular method is carpooling. Setting up a carpool group with people from your office will not only help save money, it can help you make friends as well. If you live in the right city, you could also eliminate the cost of owning a car altogether and take public transit. According to Bankrate, employees are allowed to deduct up to $230 of transit costs per month from their tax returns if they utilize public transit or ridesharing options. In some climates, it may be possible to ditch the car or the bus entirely and walk or bike to work. If you want to try this, you could end up almost eliminating your transportation expenses, but remember that it can be a big commitment that’s not always feasible, or comfortable.

According to the U.S. Department of Agriculture, a typical family of four could spend just under $600 per month by adopting a thrifty food spending policy. On the other hand, eating out nearly every night could cost the same family twice that amount per month. Food is just as essential as housing and transportation, and yet too many Americans choose not to be frugal with how they budget for it. In reality, flavorful, healthy meals can be cooked for a fraction of the cost of similar meals at a restaurant. This is possible with a little bit of planning.

Budget blog The Simple Dollar recommends trying to go as long as possible between grocery store trips, and sticking to a list when you do make the trip. It’s important to plan out meals each week, but savings can be amplified by planning them around discounts, coupons or other special offers at your local grocer. Most stores print a weekly flyer listing all of their discounts. Perhaps the most important skill in saving on food is to learn and practice cooking. Restaurants charge extra for the cost of having meals cooked for you, so just learning to make simple meals could add up to the biggest and easiest cost savings. Plus, you’ll feel accomplished learning a new skill.