Please click here to see a list of our supported browsers, and instructions on how to enable JavaScript and cookies
Home/Blog/Why Gas Prices Are Low and How To Make The Most Of It 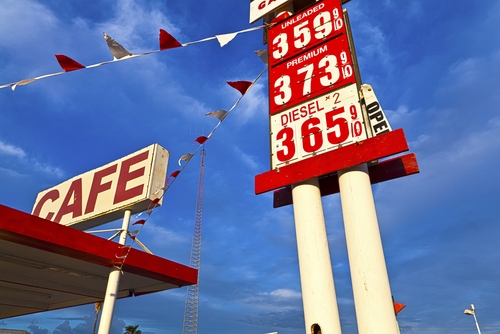 If you’re one of the millions of Americans who depends on a car, and the gasoline fueling it, to get from place to place every day, you’ve no doubt welcomed the recent slump in gas prices. According to price monitoring website GasBuddy, the average price for a gallon of gas for the week beginning Feb. 1, 2016 nationwide fell to $1.79, the lowest since 2004. In some areas, including Oklahoma, the price per gallon is now less than $1.50. According to a variety of experts on the subject, low gas prices are generally good for the consumer. However, how long this trend lasts is anyone’s guess, which means it’s not exactly a good excuse to spend lavishly.

“The source of low gas prices is actually quite complicated.”

The economics behind the price drop

While many of us celebrate the constantly falling price on the gas station sign, most are also unaware of exactly what’s causing it. This is especially true in the wake of historically high gas prices just a few years ago. The answer to the source of low gas prices is actually quite complicated, but can be distilled down to a few key factors. Ultimately, much of the reason can be chalked up to the basic logic of supply and demand. It is a central point of economic theory that when the supply of a product is high and the demand is low, its price will be low. This is precisely what’s happening in the global oil market, according to The New York Times. An array of influences from around the world have created conditions where people are consuming less oil than businesses are producing. In turn, oil companies are left with extra product that needs to be sold.

Therefore, consumers reap the benefits, at least for the time being. According to AAA, low gas prices helped American motorists save $115 billion collectively over the course of 2015. As 2016 begins, many predict oil prices, and thus the cost of gas, may rise slightly, but still stay relatively low. That means a little extra money in the average American’s pocket. It also means lower inflation, which is the increase in the cost of goods and services relative to the value of the money used to purchase them. In the last few years, according to the U.S. Bureau of Labor Statistics, inflation has been historically low. For 2015, inflation increased just 1.7 percent, much lower than a recent high of 4.1 percent in 2008. This rate is somewhat related to the price of oil, since it is a vital part of the economy. Low inflation means more money saved over long periods of time.

However, a lower inflation rate isn’t always a good thing, according to some economists who spoke with NPR on the matter. While low inflation means lower prices on items bought in the store – generally good for consumers – it also means the businesses producing those goods may be losing money. This could be especially problematic for businesses in the oil industry, which comprise a large portion of the American economy and play a role in many other industries. When these companies make less money from their products, they are forced to lay off workers, who then create an extra burden on the economy. This is why some economists are worried that low oil prices could cause another recession, according to Bloomberg.

If this suddenly seems very troubling and complicated, don’t worry. While the economics behind the low price of gas are hard to grasp, the implications aren’t so complex. You may be saving a sizeable chunk of change now that your regular fill-ups are less costly. However, that doesn’t mean you should spend more money on other things you don’t necessarily need. Instead, the wise course of action would be to take the proactive course. Instead of buying more clothes, sock those gas savings away in a savings account, using it to boost your rainy day fund. That way you may actually be more protected in case gas prices begin rising again. It also gives you greater peace of mind to handle an emergency, like an unexpected layoff.