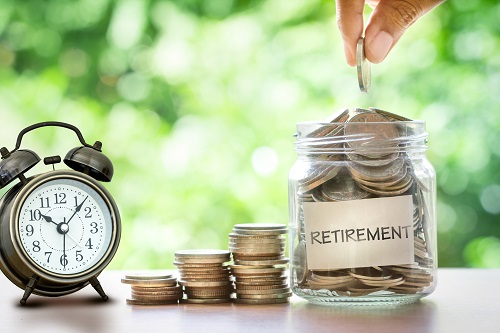 While retirement may seem far off in the future, saving for retirement is a worry that’s on many American’s minds. According to a recent Gallup poll, 63% of Americans worry about saving enough for retirement, which is a 5% increase from 2021 and the highest it’s been since 2016. The cost of living has risen significantly in the last year, which may push thoughts of saving for retirement to the back burner in your mind. However, the earlier you can begin saving for retirement the better off you will be when the time to retire arrives, even if you’re only contributing a small amount each paycheck. Here’s some options for you to consider when building wealth to prepare for retirement.

A 401K plan is one of the most popular retirement plans and, if available, is offered directly through your employer. With a 401k you contribute a certain percentage of your pay each check, typically with a required minimum contribution of 1%. One of the best things about a 401k retirement plan is that employers will typically match their employees’ contributions up to a certain amount. For example, if you contribute 3% of your pay into your 401k, your employer may also contribute 3% of your pay, doubling the amount that’s contributed without any additional cost to you. Additionally, a 401k will further build your wealth as the money deposited into the account is invested in stocks or bonds according to your choices when you set up the account. If you’re not familiar with investing, most companies will offer a recommended option. Money invested into a 401k is taken from your pre-tax income, which decreases the amount of money you pay to taxes now, however, the funds will be taxed later at the time of withdrawal. In general, you are unable to withdraw funds from your 401k until you are aged 59 ½ or older. You may be able to make an early withdrawal if experiencing certain hardships, in the form of a loan, or if you have left your employer. In cases of an early withdraw your funds will be taxed at the normal rate and may be subject to a penalty by the IRS.

An IRA is an individual retirement account and is like a 401k except it’s not managed by an employer, and instead is managed directly by you. There are two main types of IRA’s, a traditional IRA and a Roth IRA, and the biggest difference between them is when you pay taxes on the funds. With a traditional IRA, money you invest into the account is taken out of your pre-tax income and is taxed at your tax rate upon withdrawal of the funds, similar to a 401k. With a Roth IRA, money you invest into the account is taken out of your after-tax income, meaning no taxes will be deducted later when you’re ready to withdraw funds. A traditional IRA also requires a minimum distribution of funds from the account beginning at age 72, while a Roth IRA does not. Just like with a 401k, funds deposited into an IRA will be invested into stocks and bonds to build upon your wealth and will be subjected to a fine by the IRS if funds are withdrawn before the age of 59 1/3. However, unlike a 401k, IRA’s do not require a minimum contribution amount. This means you can invest money into your IRA when you have it available.

A high yield savings account isn’t a retirement plan, but it’s worth considering as a way to save money for retirement. Saving accounts in general earn you more money on your deposits in the form of interest paid to you by the bank. When someone comes to the bank seeking a loan, the bank essentially borrows the money held in savings accounts to provide funds for the loan, which is why you get these interest payments in the first place. The difference between a traditional savings account and a high yield savings account is that the latter will pay a higher rate of interest effectively earning you more money than if the funds were in a regular savings account. As with any option you choose, using a high yield savings account to save for retirement will have its positives and its negatives. You won’t receive any employer contributions with this option, and the rate of return is likely going to be much lower than if invested into a 401k or an IRA. However, you will have the freedom to deposit funds when you have them available and, in the event of an emergency, can withdraw the funds at any time. Take careful consideration though when withdrawing funds, and only withdraw if it’s necessary so you can ensure funds are building as intended for retirement.

A source of income many Americans have available for retirement is Supplemental Security Income, or SSI. SSI is something you pay into every paycheck through taxes, and when you become of retirement age, if approved, you can begin collecting it. Social Security will determine the amount you’re eligible to receive based on several factors, including your lifetime earnings from work, how much you paid into SSI in taxes, the age in which you begin collecting benefits, and other assets you have at the time of retirement. The longer you wait to retire the more money you will receive from SSI. You are eligible for 100% of your determined SSI amount once you reach the full retirement age, which as of now is 67 years old. You can begin collecting benefits as early as age 62, however, by collecting benefits at an earlier age you will only be eligible to receive a percentage of your full SSI amount. You can collect SSI in addition to receiving funds from a retirement account as mentioned above, however, funds in a retirement account or savings account will be considered an asset and can affect how much you’re eligible to receive in SSI.